Event Report: Get Out and Ski Backcountry Festival

As alpine lift ticket and equipment prices continue to rise, more and more skiers are looking to the backcountry to satisfy their sense of adventure while gaining positive health benefits.  The Catamount Trail Association offers opportunities for those new to the backcountry to try new equipment, practice new techniques, and learn about other strategies and accessories that help set the stage for positive and safe excursions.

The Catamount Trail Association hosted its 2nd Annual Get Out and Backcountry Ski Festival at Bolton Valley Nordic Center Sunday January 24th.  Sixty-six enthusiastic skiers from throughout New England experienced a perfect day of backcountry skiing on some of the best terrain in Vermont.

Designed for skiers who had previous cross-country ski experience,

this all day event focused on the basic techniques needed to feel comfortable in the backcountry. Numerous companies including Rossignol, the Ski Rack, the Outdoor Gear Exchange, and TSL Snowshoes were on hand with demos, giving participants the opportunity to experience first hand the various types of backcountry gear.

Under the sunny skies and powder conditions, expert instructors led groups of skiers through Bolton Valley’s backcountry trail network. Lessons on ungroomed backcountry trails and in powder filled glades covered basic balance and edge-control, climbing and descending techniques, and the classic telemark turn.  Many skiers were captured on video and were able to review their technique as an additional learning opportunity at the après ski social.

While the perfect day of backcountry skiing came to an end,  Amy Kelsey, Catamount Trail’s Management and Protection Director, gave an informative talk about being prepared for the unexpected in the backcountry and what accessories one might carry to meet those needs. Jim Fredericks, Catamount Trail’s Executive Director followed with a talk about matching the proper equipment to the personal needs of the individual.

The Catamount Trail Association will also host the 3rd Annual Backcountry Challenge Race and Tour on March 14th. This 17km race or tour starts at the Trapp Family Nordic Center and ends at the Bolton Valley Nordic Center. For more information, go to www.catamounttrail.org or call 802-864-5794.

Tagged backcountry, catamount trail bc challenge, events, Get out and Backcountry Ski Festival

A happy group of skiers in front of Bryant Cabin.

We have heard from several people interested in skiing with other folks on the Bolton Backcountry Trails… these tours and events are perfect way to explore and meet others interested in BC skiing.

2nd Annual Get Out and Backcountry Ski Festival

Tagged backcountry, catamount trail bc challenge, events, Get out and Backcountry Ski Festival 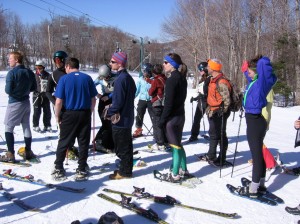 Snowshoe racers get last minute instructions and wait for their alpine teammate to finish.

Race day dawned clear, sunny and warm as 11 team of 3 racers gathered at the Bolton Nordic Center.  There were many great costumes, lots of neon and spandex on course. Everyone had a great time  and cheered loud as everyone crossed the finish line. The race started with a slalom, then  snowshoe and finally a nordic ski.

Event Report: Get Out and Backcountry Ski Festival

Registration area with lots of great info from CTA and Bolton.

Perfect powder, excited participants and great volunteers were the hilights of the 1st Annual Get out and Backcountry Ski Festival at Bolton Nordic.  Early morning temps in the single digits didn’t deter about 50 people from getting out to Bolton yesterday for a great day of backcountry tours and clinics sponsored by Catamount Trail Organization.

Amy Diller from the CTA opened up her pack to share what she brings out on a backcountry ski. Check out her blue helmet.

Lunch was busy with talks about How to pack backpack for a day of skiing and a discussion of skis, boots and poles for backcountry.  Just before heading back outside for the afternooon sessions the group was tested on CTA, U.S. Skiing and Bolton trivia… prizes included great stuff from the CTA  gift vault. 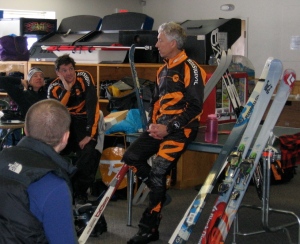 Jim from the CTA and Morgan from Rossignol answer questions about backcountry gear.

The afternoon session included longer tours to Georges George, Bryant, JJs and Holden’s Hollow.  At the end of the afternoon everyone was tired and happy after a great day outside.

Tagged backcountry, events, Get out and Backcountry Ski Festival, just for fun, photos

Today was a cold day, but it was not without lots of  skiing action.  Early morning clouds vanished and a brilliant blue sky appeared in time for a great ski day.  We hosted the Mansfield Nordic Club Youth Ski League Duathlon.  It was a great crowd of excited kids and parents coming from as far away as the Frost Mountain Club in Ripton. (Frost Mountain has the best team hats.)

The events started with a Lollipop Race for the littlest kids…. and the prize was not just any old lollipop, but a fancy rock candy lollipop.  The J5-J3 racers did race in Duathlon format- Starting with a mass start and classic race loop, then they changed their skis and poles and finished up the race with a skate loop.  With bomber classic tracks and nice firm corduroy for skate the racers were happy and skied fast. 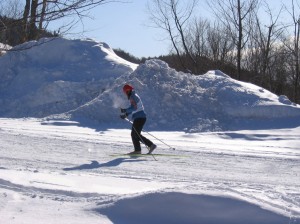 The lead boys working together into the last lap on Picnic Loop. 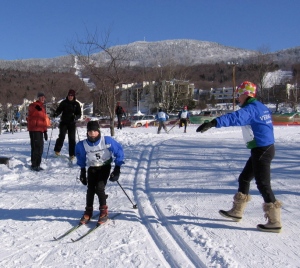 Parents directing racer into the transtion zone to change skis from Classic to Freestyle. 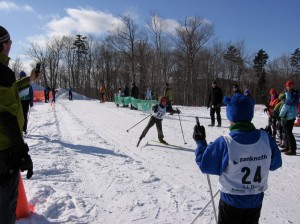 Lollipop kids coming into the finish line with lots of cheering from parents and other racers.

Racers getting a course description from Murray. 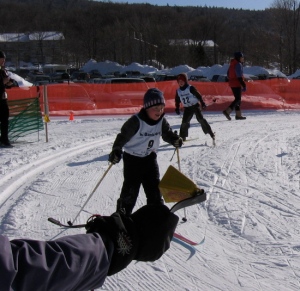 Parents cheering with a bell for the Lollipop Race.

Lollipop racer from Frost Mountain Club making the turn on her second lap as her dad cheers.

We are hosting a Vermont Winter Trails Day to provide those nearby who have no experience with Nordic skiing or snowshoeing the chance to learn the basics and try out great gear.

Check out our Events page and www.wintertrails.org for all the details.

This Saturday is also the Ski Rack Ski Swap…. last chance for equipment.  Drop off gear to sell by Friday at 7pm and the Swap is Saturday 9am-6pm.

Sunday: Bright sun, blue sky, 40 degrees at 8am— this is spring skiing. We have 100% of trails open and 25km classic tracked/ 30km skate groomed. It’s corn snow out there. Wax is klister. And remember Sale in the Nordic Shop– stock up for next season. Also Today is the last day for early season pass prices- Order now and SaVe!! Link here for the online season pass store or visit us today and purchase your pass.

Saturday: We have 25km groomed for classic and skate. On the groomed trails the surface is loose granular. At 11am it is 35 degrees. It’s pretty foggy, but the clouds are forecast to lift in the afternoon. Pond skimming is happening at 1pm– come up for a quick ski, then watch pond skimming and enjoy the bbq. In the backcountry the Ski Patrol reports that there is granular and firmer up above Bryant Cabin… but very skiable.

Thanks Racers- we had a very successful 2008 Trapps to Bolton Backcountry race in some challenging conditions and weather last Saturday. Link here for full results!

Catamount Trail BC Challenge Race —  Trying to discourage all but the hardiest backcountry skiers, the race poster read ”No Wimps Allowed”. This didn’t discourage fourteen hardy souls who signed up to take the challenge and when it came to race day, twelve racers stepped up to the starting line.

Socked in by dense fog and threatening rain, the racers sprinted out of the start on the groomed trails at the Trapp Family Touring Center. After three kilometers, they made a sharp turn onto the Old County Road and the ungroomed Catamount Trail. Another couple of kilometers, the racers were greeted by the Stowe Mountain and Rescue Squad at the beginning of a seven kilometer grueling climb to the highest point on the Catamount Trail at 2420 ft. At that point Eric Tremble led the charge at a blistering pace with Justin Beckwith in hot pursuit 30 seconds behind. The other competitors were more spread out as they paced themselves for the long climb ahead. Racers using lighter weight racing poles with small baskets punched through the top layer of crusty snow causing more difficulty in the climb. About 45 minutes into the race the going got even tougher for the competitors as a cold rain created an icy coating on the course and harder climbing conditions for all those except racers with kicker skins.

The finish arena was a welcome site for the competitors at the Bolton Valley Touring Center with professional race course fencing, pop up tents, and a enthusiastic group of spectators. First over the line was Eric Tremble of Jericho, VT who maintained his lead throughout the race and nailed down a lightning time of 1:42:39. Tremble crossed the finish line displaying a big smile and a trace of souvenir blood on his face caused by a crash in his daredevil descent. Justin Beckwith of Waitsfield, VT never backed off his pursuit of Tremble and crossed the finish line soon after in 1:44:40. Third place went to Chris Rodgers of Westford in 1:56:11. In the women’s category Sarah Moore from Waitsfield, VT overtook Betsy Richert of Keene, NY on the descent to take top honors in the women’s category in 2:23:48. Unable to detach her kicker skins, Richert lost valuable time in the downhill and finished 1 minute and fourteen seconds off the pace. Competitors used a wide range of equipment from no-wax touring skis and boots to heavy backcountry equipment and plastic boots. The winner, Eric Tremble used no-wax touring skis, light touring NNN boots, and BC telescoping poles.
Beckwith raced with light metal edged BC skis outfitted with NNN racing bindings and a combi boot. His Swix Universal klister worked extremely well throughout the race but he said his race poles with smaller baskets hindered his climbing ability.

Following the race, all competitors and volunteers were treated to a much appreciated pasta buffet at the BV Nordic Center. A great array of prizes were donated by by Karhu USA, Trapp Family Lodge, Rossignol, Bolton Valley, and the Catamount Trail Association. When the day came to an end, all the racers had a great time and vowed to return for the next years 2nd Annual BC Challenge. The profits from the race will be donated to the Catamount Trail Association.

Regestration Deadline Extended– Registration closes Friday March 7th at 5pm.  With new snow in the forecast this should be an exciting event.  More info on our events page.

08 Entry for the Jay Challenge

Win these Salomon BC Skis Donated by Trapps.